Alghero is a town of about 42,000 inhabitants In the region of Sardinia. It lies in the province of Sassari in the North-western Sardinia. 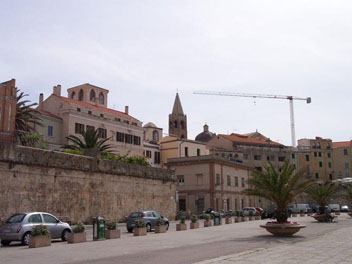 The area of today’s Alghero was settled since pre-historical times. The so-called Ozieri culture was present here in the 4th millennium BCE while the nuraghe civilization was present from around 1500 BC  and traces of Phoenician buildings have been found not far from the city. Alghero was founded around 1102 by the Genoese Doria family, as a fortified port. The Doria ruled it for centuries, apart from a brief period under the rule of Pisa (1283-1284). In 1353 it was captured by the Aragonese under Bernardo de Cabrera, and could later grow thanks to the arrival of Catalan colonists: in the early 16th century Alghero received the status of King’s City (ciutat de l’Alguer) and developed economically.

The Catalano-Aragonese were followed by Habsburg Spain, whose dominion, ended in 1702, brought some decadence to the city. In 1720 Alghero and Sardinia were handed over to Piedmont. Around 1750, a wide channel was excavated to improve the defensive stand of the peninsula. In 1821 a famine led to a revolt of the population, which was bloodily suppressed. At the end of the same century Alghero was de-militarized and, during the Fascist era, part of the surrounding marshes was reclaimed and the suburbs of Fertilia and S.M. La Palma were founded, although the presence of malaria in the countryside could be overcome only in the 1950s. During the World War II (1943) Alghero was bombed, its historical centre suffered heavy damages. After the end of the war, Alghero became a popular tourist resort. A minority of people in Alghero speak a Catalan dialect, introduced when Catalan invaders repopulated the town after expelling the autochthonous Sardinian population in 1372. Catalan was replaced as the official language by Spanish in the seventeenth century, then by Italian. The most recent linguistic research conducted showed that 22.4% of the population speak Algherese Catalan as a first language and around 90% have some understanding of the language.

Some 100 Nuraghe remains can be seen in the neighbouring areas of Sant’Imbenia (including also a Phoenician necropolis and Roman remains near the airport of Alghero), Palmavera and Anghelu Ruju.