Trento is an Italian city located in the Adige River valley in Trentino-Alto Adige/Südtirol. It is the capital of the region and of the Autonomous Province of Trento. 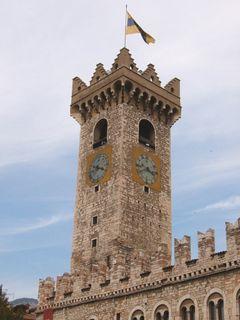 Although off the beaten path of mass tourism, Trento offers rather interesting monuments. Its architecture has a unique feel, with both Italian Renaissance and Germanic influences. The city centre is small, and most Late-Medieval and Renaissance buildings have been restored to their original pastel colours and wooden balconies. Part of the medieval city walls is still visible in Piazza Fiera, along with a circular tower. Once, these walls encircled the whole town and were connected to the Castello del Buonconsiglio.

The main monuments of the city include:

Trento also sports noteworthy modernist architecture, including the train station and the central post office, both by the rationalist architect Angiolo Mazzoni. In particular, the train station (1934-36) is considered a landmark building of Italian railways architecture and combines many varieties of local stone with the most advanced building materials of the time: glass, reinforced concrete, metal. The post office was once decorated with coloured windows by Fortunato Depero, but these were destroyed during bombings in World War II. Other buildings of that time include the Grand Hotel (by G. Lorenzi) with some guest rooms furnished with futurist furniture by Depero, and the “R. Sanzio” Primary School built by Adalberto Libera in 1931-34.

An important museum of modern art (Museo d’Arte di Trento e Rovereto) is located in the nearby town of Rovereto.

The Museo tridentino di scienze naturali (Trent Museum of Nature), is a museum of natural history and science.

Trento’s surroundings are known for the beautiful mountain landscapes, and are the destination of both summer and winter tourism. The Alpine Botanical Garden, located on Monte Bondone in Le Viotte was founded in 1938 and is therefore probably the first such garden in Italy.

Trento is also the venue of a popular Mountain Film Festival.