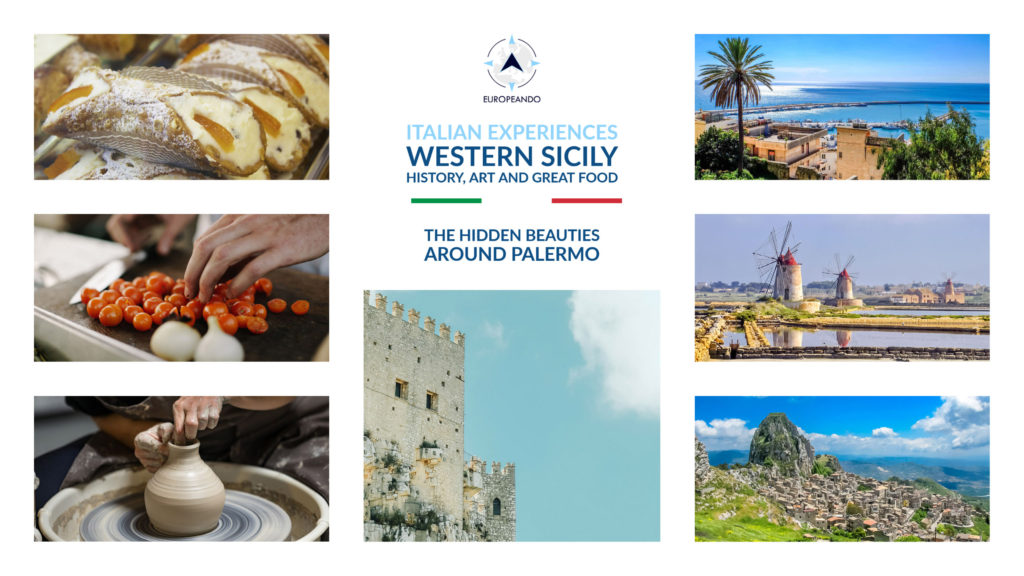 A way to discover the hidden beauties around Palermo

A way to discover the hidden beauties around Palermo

Arrival on behalf of the client at the port or airport of Palermo. Encounter with our English speaking driver / guide and private vehicle. Departure to Piana degli Albesi, a small town in the province of Palermo, where an Albanian dialect is spoken. Interesting visit to the churches of San Jorge and Santa Maria di Hodegetria and San Demetrio. View of the artificial lake. Tasting of Sicilian cannoli. To continue, continuation to San Giuseppe Iato, visit of the archaeological park. Finally, walking in Corleone along the golden valley. Arrival at the hotel, check in accommodation

Breakfast. visit of the island of Mozia with circumnavigation of the island. Between archaeological remains and a beautiful landscape, the Egadi Islands emerge between the whiteness of the salt, the green of the land and the blue sea. Next, tasting at the Cantina Pellegrino wine tasting in Marsala. Walking tour through the city of the conquest of Garibaldi. Check in and accommodation.

Breakfast. Departure for Caltabellotta, a small medieval center perched at the foot of a characteristic rock. From the Arabic name Kal't to bullut (rock of oaks). It is the place where peace was signed between Aragonese and Angevin. Cooking class. To continue, Visit to the coastal center of Sciacca, in the province of Agrigento, where part of the medieval walls, the ruins of Castillo De Luna, palaces, monasteries and Baroque churches are preserved. Visit to a workshop of artisan potters.

Breakfast. Departure for Bagheria. Visit to Villa Palogonia and Villa Lanza. Visit to the Guttuso Museum of Contemporary Painting. Bagheria is the largest city in the province after Palermo. It rises immediately after Mount Grifone and adjacent to Mount Catalfano where the old Solunto was located. Its territory contains several villas from the 18th century and some of monumental artistic value. Solunto or Soloeis or Solus, was a city of emporium dominion and later Carthaginian. It was abandoned by its own inhabitants after the Roman conquest. You’ll have the chance of visiting a villa with a concert. Or typicl dinner.

Breakfast. Departure for Caccamo, a medieval center where an old castle and the cathedral of Norman origin are preserved. Several 18th century artists dedicated themselves to their pictorial works here (Vito D'Anna, Giuseppe Velaquez, Pietro Novelli, Vincenzo La Barbera etc). Continuation to Himera: there are immortal places among these the ancient city of light, here the Greek rule over the Carthaginian 480 BC was determined, here the battle took place where today the Temple of Victory is located. Guided visit. At the necessary time, transfer to the port or airport of Palermo and end of services.

Bus/ Van at disposal for the mentioned itinerary;

English speaking escort guide/driver up to 8 people (driver and guide with more than 8);

Entrances to the archaeological area of Mount Jato;

Circumnavigation and desembarkment in Mozia;

Visit of the Sciacca pottery workshop;

RATES DO NOT INCLUDE:

There are no reviews yet.